This is a port of 3D Pinball - Space Cadet for Nintendo 3DS. It’s originally a game that came bundled with Windows from Windows 95 up to Windows XP. This is the current state of the project:

It is based on the PC decompilation made by k4zmu2a: https://github.com/k4zmu2a/SpaceCadetPinball

The PC decompilation uses SDL2 to render the game. This 3DS port has been changed to use native GPU rendering with the Citro3D library.

The main requirement is to have devkitPro.

Follow the instructions to install devkitPro here: https://devkitpro.org/wiki/Getting_Started You will also need the 3DS development package, and also the libraries 3ds-sdl and 3ds-sdl_mixer.

If you use Windows or Ubuntu, here are more detailed instructions.

Even though devkitPro offers a Windows installer, I’ve had some issues setting it up. It’s easier to use WSL. If you want to use the Windows installer anyway, check the link above for instructions.

Ubuntu and other Debian based linux distros

After a successful build, you will get a file called SpaceCadetPinball.3dsx, which is the main executable. 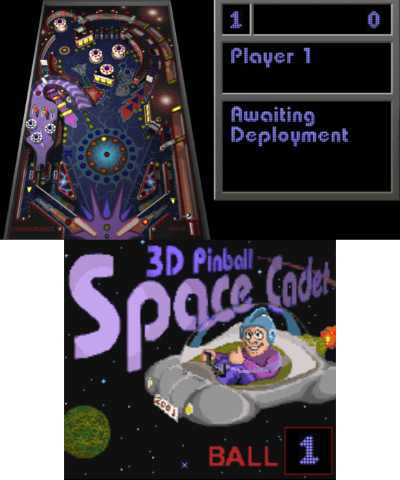